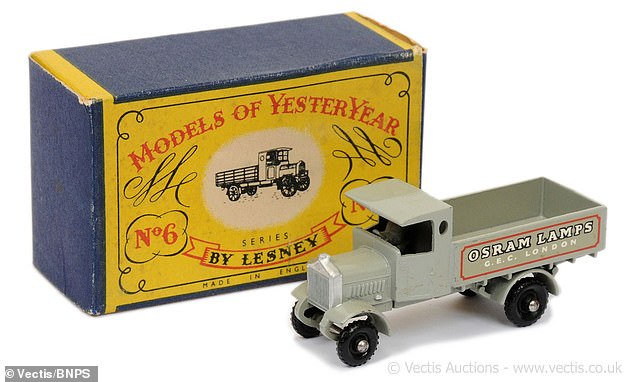 A rare two-shilling Matchbox toy replica of the 1916 Osram Lamps lorry sells for £5,520

A two-shilling toy truck from 1961 is now worth £5,520! Rare Matchbox 1916 Osram Lamps replica sells for thousands after bidding war

A rare Matchbox toy truck has sold for a staggering £5,520 after a bidding war at auction.

The gray truck is a replica of an Osram Lamps vehicle from 1916.

The toy was produced by Matchbox in 1961 and then sold for two shillings and three pence – around 11 pence in today’s money.

It is so sought after because it has plastic wheels that were only used on a few examples late in the production run.

If it had the most common metal wheels it would only be worth around £20.

Toy expert Julian Royse said now is a good time to sell if you have a rare toy car and also noted that future generations will likely be “more interested in Marvel action figures”.

The toy was offered for sale by a Matchbox collector who purchased it in 2012.

It bears the logo of a London-based light bulb company still in business today and fetched one of the highest awards achieved for this type of Matchbox model. 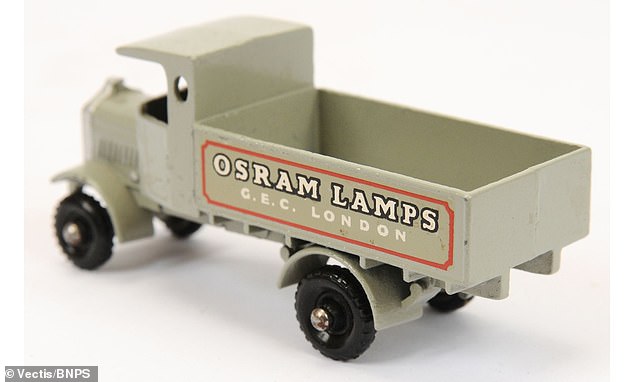 Mr Royse said this was due to a combination of the toy’s “excellent condition” and rarity.

He said: “This type of Osram Lamps truck was made from 1956 to 1961, but this example was so valuable because of its black plastic wheels.

“They were only used for a few models when production ended in 1961, so when they hit the market it excites collectors.

“I haven’t seen one come up for sale in six years and it’s safe to say this is one of the highest prices achieved for the Models of Yesteryear range.

“If the toy had metal wheels it would have been worth £20.

‘The seller is a match collector and he and we are delighted with the result.

“If you own a rare and valuable model, now is a good time to sell because the market is so strong and the prices are astronomical.

“In the future, young collectors will be more interested in Marvel action figures than Matchbox.”

The brand was acquired by Mattel in 1997.