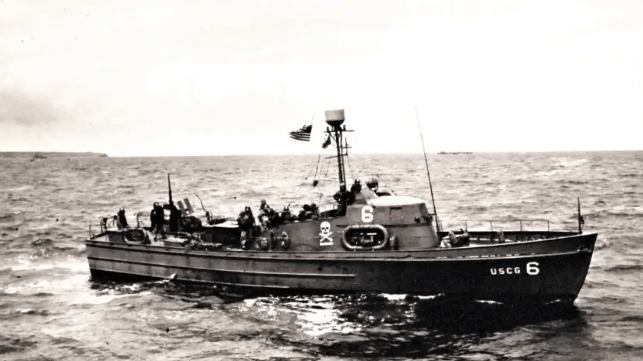 CG-16 and the Matchbox fleet

The night of the invasion was amazing. There was a continuous flash of light in the sky and we could hear the bombs. It was a non-stop fire.
– Mike Swierc, Automotive Machinist Second Class

Nearly 80 years have passed since Motor Machinist’s Mate Second Class Michael J. Swierc served on the Coast Guard CG-16 off Utah Beach during the first wave of the D-Day invasion. But for Swierc, a 100-year-old Coast Guard veteran, the memory of that day of days never faded from his mind.

Facing heavy German artillery, including deadly 88 millimeter batteries and numerous machine gun nests, was not exactly what Swierc had expected upon enlisting in the Coast Guard. He and his younger brother had joined the service in 1942 hoping to protect national waterways and scour American shores for enemy submarines. Instead, the farmer’s son found himself crossing the freezing waters of the English Channel more than 5,000 miles from his hometown of Falls City, Texas.

Already a seasoned mechanic, Swierc spent the first 22 months of his Coast Guard service swept up in a whirlwind of basic training and diesel engine training before deploying overseas. The 31-day trip from Bayonne, NJ, to Ireland was fraught with difficulties. Swierc spent his days aboard his transport ship peeling potatoes, scrubbing dishes and grimacing at the sound of the wind whipping the bulkhead. “In a way, I never got seasick,” Swierc marveled. “But we faced the most terrible of storms when we crossed the Atlantic.”

The cutter of Swierc, the 83 feet CG-16, nicknamed “the carrier pigeon” or simply “the 16th”, was assigned to Rescue Flotilla One. Also known as the “Matchbox Fleet” because of its timber cutters, Flotilla One was a fleet of 60 Coast Guard patrol boats that had been hastily summoned a few weeks prior. Although these woodcutters were designed to hunt U-boats, their Coast Guard crews were tasked with the D-Day mission of rescuing Allied soldiers and sailors during the invasion. 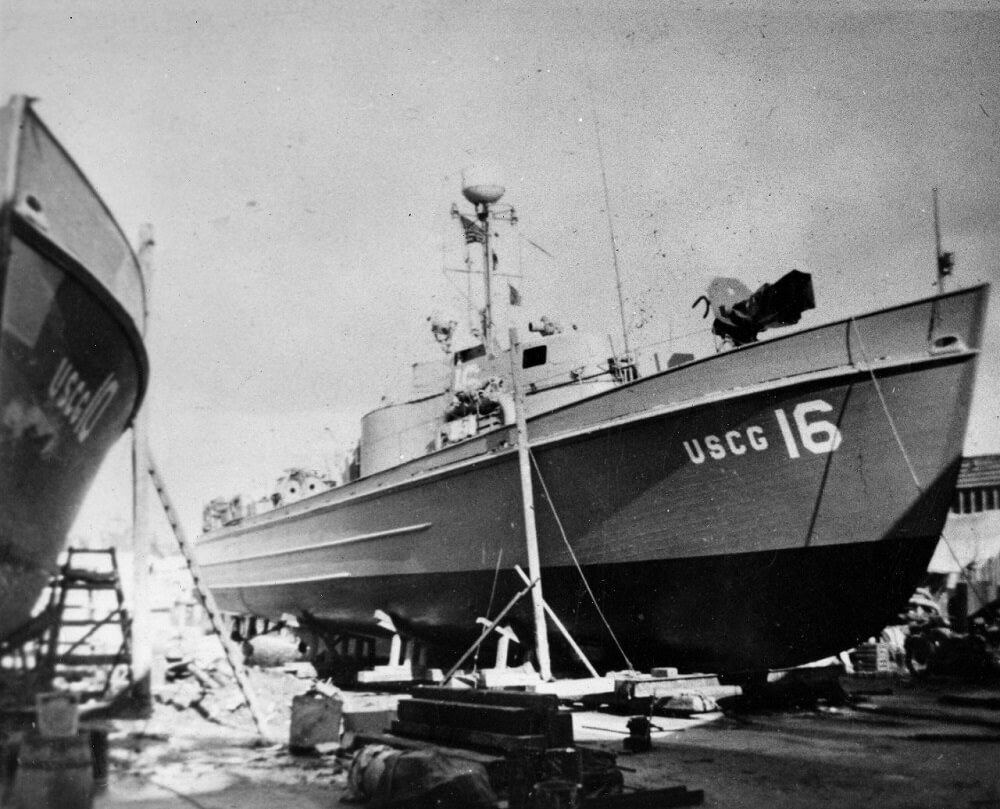 In the evening leading up to June 6, 1944, ships of all kinds left seaports along the English coast. Around 04:00 on 6 June, the Allied ships arrived at a central rendezvous point and the combined armada headed for the French shores. Rough seas battered the 83ft cutters and soaked the men, many of whom were desperately seasick. Bullets and shells roared above our heads and pounded the water all around the Allied ships at the approach to Normandy beaches. “We didn’t really have time to be scared,” explained Swierc. “We got in there and followed it.”

As soon as CG-16 Arrived off Utah Beach, Swierc and his crew plunge into action. At approximately 07:30, a landing craft was hit by a shell about 800 yards from the beach and quickly sank. CG-16 immediately went to the rescue.

As the 16 retrieved the last survivor from the landing craft, another rescue began. The Control Vessel for Utah Beach, USS PC-1261, was wiped out when an artillery shell slammed into her starboard side, instantly killing almost half the crew. PC-1261 led the first wave of landing craft ashore and was the first Allied ship sunk on D-Day. With shells dotting the water around CG-16 and nearby mine explosions shaking the decks under their feet, the Coast Guard crew began pulling survivors from the oil-covered waves. 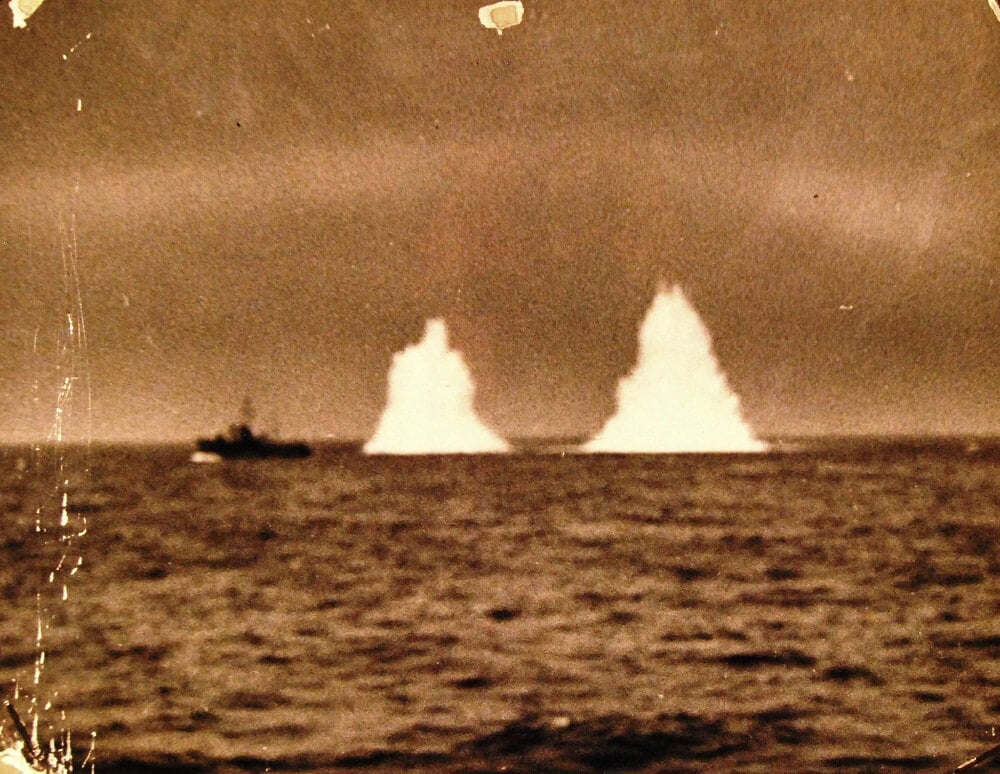 An 83 from the Matchbox fleet under German fire (USN)

After spotting two wounded Allied soldiers in the water, Swierc jumped off the cutter, swam 40 yards through enemy fire, and tied a lifeline around the men. “The only guy said, ‘Don’t worry about me, just take my mate,’ Swierc recalled. “But I looked at his mate, and he was bleeding his head in the water. He was already deceased. »

Unflinchingly, CG-16 the chief engineer swam through the 54 degree water while his shipmates aboard the cutter brought the two soldiers back. It was one of many daring dives Swierc made in the water that day. “We were out there swimming flat out,” Swierc said. “That water was freezing but you just didn’t pay attention to it – you just swam.”

With 90 soldiers and sailors rescued on decks, the 16 moved away from PC-1261 floating debris field and delivered survivors to the Coast Guard manned USS Joseph T. Dickmana transport ship converted into a hospital nearby.

The doctors boarded the 16 of the Dickman to help with stretcher cases. They declared one man dead and declared another beyond recovery, saying he would live only minutes. He had received a serious wound in the abdomen and the shell had taken away the side of his mid-region. Due to the urgency of the work to be done, the dead and dying were taken below for later disposal. At the earliest opportunity, a burial at sea was arranged for the deceased.

During the burial ceremony, the man thought to be dead poked his head through the hatch and informed the ship’s crew, “If you think you’re going to do this to me, you have another guess coming. How about a hot coffee, but hot; and for love, give me a cigarette! Half an hour later, chalk white but still alive and full of courage, this man was taken on board an LST hospital ship. Whether or not he survived is unknown. When last seen, he was still the man who refused to die despite “doctor’s orders”.

Immediately after handing over the last survivor, CG-16 The captain, Coast Guard JG Lt. Richard McPhail, brought the cutter back into the line of fire to pick up more wounded men. An LCT was sighted about 1,500 meters from the beach under heavy fire and sinking from the stern. The vessel had struck a mine and was listing on its side, threatening to trap more than 30 crew members underwater. The salvage cutter maneuvered alongside to find the ship was loaded with ammunition and was burning.

All 16 rescued the crew and moved away from the distressed vessel. Meanwhile, one of the survivors told McPhail that a shipmate with broken legs was still aboard the landing craft in one of the gun bins. Despite the likelihood of an explosion from the fire raging around the craft’s cargo, McPhail moved and fired alongside. Volunteers boarded to pick up the injured. He was in the barrel of the gun and ropes were hanging from under his arms. Suddenly the LCT became an almost crushing turtle CG-16. The volunteers and the injured sailor were thrown into the water, but Swierc and his shipmates hoisted them aboard seconds before the landing craft sank. Survivors from the landing craft were taken to an LST hospital ship for medical treatment.

A Matchbox Fleet 83 unloading survivors onto a hospital ship (USCG)

After dropping off the LCT survivors, CG-16 the crew rushed to rescue survivors from a third landing craft decimated by enemy artillery shells and sprawled less than a mile offshore. The wooden 16s cut through enemy magnetic mines and relentless shellfire to reach the men. “The whole bridge was completely covered with survivors, most of them traumatized,” Swierc said. “It was a sad situation, but we were sent there to do it, and we did it as best we knew how.”

Although he had no formal medical training, Swierc found himself administering first aid to those sprawled on the deck of his ship. Hands that had spent countless hours picking cotton and repairing tractors injected morphine into the veins of injured men and marked each on the forehead with an “X” to register the injection. After easing the survivors’ pain, Swierc and his shipmates secured them in baskets and transferred them to the decks of the USS. Dickman.

In total, the crew of CG-16 rescued 126 men on 6 June, more than any other ship present that day. Although the normal complement for these lifeboats was one officer and 13 enlisted men, every man that could be spared from shore base swelled the crews for D-Day operations. On that day, the 16th had to on board a crew of 16 men.

Swierc and his shipmates received the Navy and Marine Corps Medal for Heroism, the highest military honor for combat lifesaving. Although his award citation praises his “cool courage” and “dedication to duty”, Swierc said he was just doing what he was supposed to. “The name of the game was search and rescue,” Swierc said. “I think we did our fair share.” Sixteen medals arrived for the cutter, along with 16 citations making their Coast Guard combat rescue day the most honored in the European theater of operations during World War II.

The achievements of Swierc and CG-16 the crew highlighted the mission of the Coast Guard Rescue Flotilla. The flotilla rescued over 400 men on D-Day with a third of those rescued by CG-16. At the end of June, the Matchbox fleet rescued 1,438 Allied sailors and soldiers. With most of his comrades CG-16 crew members, Swierc volunteered to deploy to the Pacific Theater. However, the war ended before he had a chance to make the trip. In September 1945, Mike Swierc boarded a transport ship and left for the other side of the Atlantic with a souvenir in his bag. He kept a set of keys from his beloved CG-16which, along with most other cutters in the Matchbox fleet, have been abandoned or scrapped.

This article appears courtesy of The Long Blue Line and can be found in its original form here.

The opinions expressed here are those of the author and not necessarily those of The Maritime Executive.