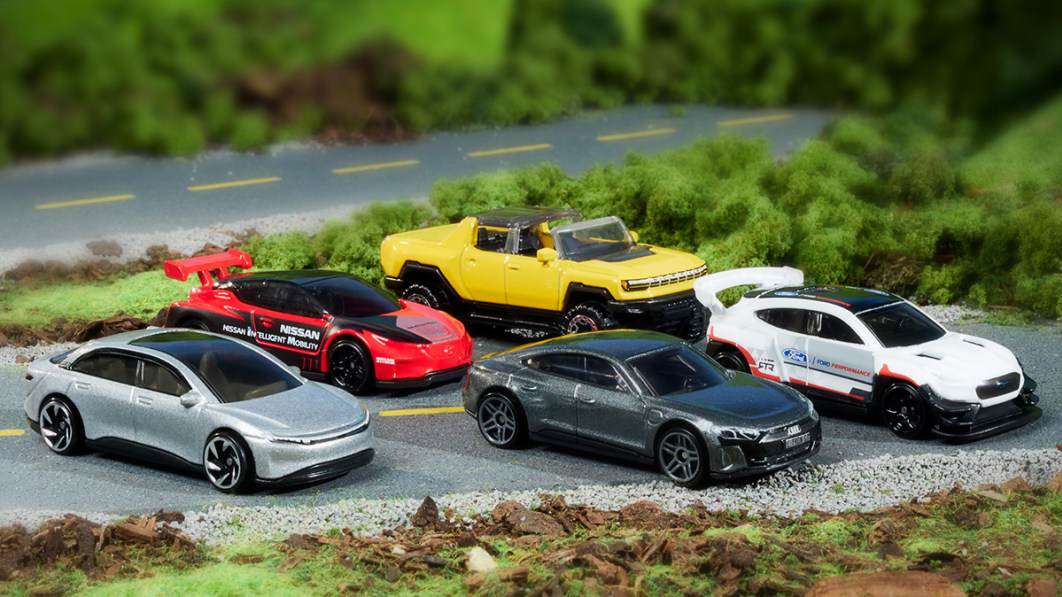 With more and more electric vehicles hitting the market, it was only a matter of time before the new breed of cars found representation in die-cast form. For 2022, Hot Wheels is releasing a new Green Speed ​​series that spotlights a diverse lineup of electric cars.

The five-car series features a fun mix of electric vehicles from different manufacturers and in a wide range of styles. Some are made entirely of bone. For a traditional luxury sedan, there’s a Lucid Air in silver, with a glass (or in this case, clear plastic) canopy. For fans of Teutonic 4-door “coupes”, there is the Audi RS e-Tron GT in Daytona Grey. Checking the truck box is a Hummer EV in a yellow that can only be described as a throwback to the H3.

But since this is Hot Wheels, there are also “hot-rodded” variants in the lineup. Rather than just a regular Nissan Leaf, they chose to release the carbon fiber NISMO RC 2.0 racing car. Likewise with Ford, instead of the standard Mustang Mach-E, they went with the Mustang Mach-E 1400 drift car.

This isn’t the first time Hot Wheels has released a Green Speed ​​series. The range debuted in 2016, but reflected the limited choices of electric vehicles in the real-life automotive market at the time. The only non-fantasy cars in the series were a first-generation Tesla Roadster, a Tesla Model S, and a Chevy Volt. Hot Wheels revamped the lineup again in 2019, this time adding a Tesla Model 3 and a Porsche Panamera Turbo S E-Hybrid Sport Turismo.

Hot Wheels also manufactures other mini electric vehicles that are not part of this specific model line. If you want to collect them all, there’s the second-generation Tesla Roadster concept, Cybertruck, Jaguar I-Pace, Pininfarina Battista, Porsche Taycan and a Volkswagen ID R. to start.

If you must have an old-school gas burner, Hot Wheels has plenty of options for you too, like, say, this sleek FJ60 Toyota Land Cruiser. The 2022 Hot Wheels Green Speed ​​Series should be on the shelves of your local retailers now.

2022-04-24
Previous Post: Hot Wheels Behind The Scenes: How One Man’s Hot Rod Became A Legend
Next Post: The Hot Wheels movie is back