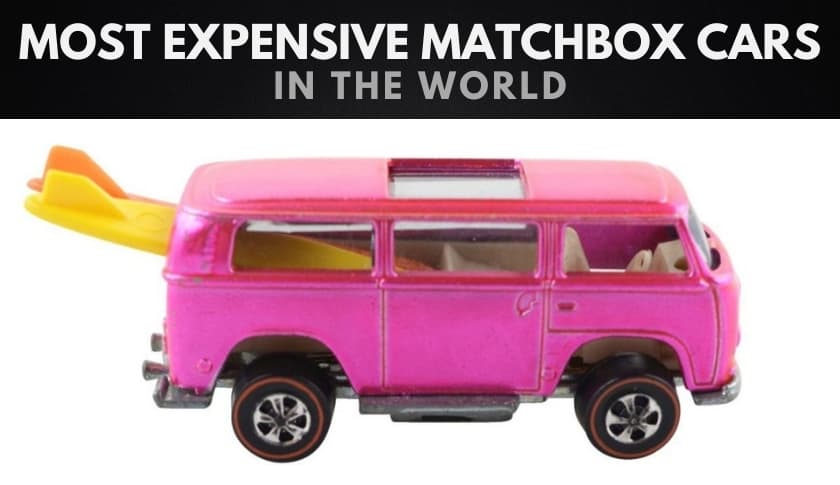 What are the most expensive Matchbox cars?

So, let’s take a look at them and see how much they’re worth!

Here is a list of the 10 most expensive Matchbox cars.

The 10 Most Expensive Matchbox Cars

The list of Matchbox cars and figures mentioned below has been compiled from various sources on the web, such as Historic Vehicle and Wikipedia.

Here are the 10 most expensive Matchbox cars:

This particular model of the 1970s Superfast 8d Rover 3500 police car is extremely rare and does not come back too often.

So it was no surprise to see one selling for $750 recently after being discovered among one of the biggest Matchbox collections you’ve ever seen.

The car attracted bidders from all over the world and was quickly picked up by an anonymous bidder.

Everyone loves a Ford Mustang, right?

Well, an unidentified bidder was willing to part with almost $3,000 to buy this rare white 1960s Ford Mustang Matchbox car.

They probably got a great deal in fairness, as the auction got a lot of attention from bidders around the world, so the Matchbox car will likely be worth a lot more money over time.

The next most expensive Matchbox car on our list is the Mercury Station Wagon.

Produced from 1969 to 1973, this particular model is considered valuable due to its color.

The majority of Matchbox Station Wagons were painted metallic light green, while this one is yellow.

It’s not 100% clear how many yellow 1968 Mercury Station Wagons there are, or how many were made.

However, what we do know is that they are worth a lot of money.

So if you do manage to find one, you might want to try and get yourself a bargain, as it’s one of the rarest Matchbox cars on the planet!

Just like the Mercury Station Wagon, the Mercury Cougar is also extremely rare, but only in one color variation – cream.

The car was produced between 1968 and 1970. It is 76mm long and comes with a white interior to complement its cream bodywork.

It’s unclear how many cream 1968 Mercury Cougars are on the road right now, but mint condition models are highly sought after and fetch big bucks at auction.

So, keep an eye out for this one, and you might get some!

The sixth most expensive Matchbox car is the Green Ford Kennel Truck.

With an estimated value of around $4,100, this little Matchbox truck is worth more than some full-size cars.

The truck was produced between 1969 and 1972 and featured a removable glossy plastic mattress topper as well as four white plastic dogs.

A mint condition model recently sold at auction for $4,100 after being in the seller’s collection for decades.

Reduced to a 1:68 version of the original car, this Matchbox model was sold to a private collector at auction in 1999 for the modest sum of $6,765.

Since then, the highly sought-after collectible has not appeared on any auction site or attracted any media attention, meaning it is likely locked away in the collector’s possession without any indication of auction in the near future.

The 1965 Dodge Wreck Truck is highly prized by collectors.

When it went on sale on eBay in 2013, the truck drew the crowds and sparked a fierce bidding war.

Eventually, the rare Matchbox truck was sold on eBay to an anonymous bidder for $8,499.

If you had $9,000 spare a few months ago, you could have won the third most expensive Matchbox car on the planet.

At a recent auction, a collector sold his lime green ERF Dropside truck to an anonymous bidder for around $9,000.

The truck is one of the rarest Matchbox collectibles of all time, and collectors are willing to pay top dollar to get their hands on it.

In 1966, the Matchbox Opal Diplomat, in Sea Foam Green, cost just 48 cents on the dollar.

However, fast forward several decades, and this rare collectible is believed to be worth around $9,000, based on consistent and comparable appraisals.

The car is considered a prototype, highly prized by Matchbox collectors and features an opening bonnet and white interior.

Will it ever be seen again at auction? It’s very unlikely but never say never.

The title of most expensive Matchbox car goes to the Magirus-Deutz Crane.

This little brown 1961 “No.30” crane truck was reportedly found at a garage sale and purchased for $10.

Why he is so valuable is unclear; however, it likely has something to do with its age, model type, and condition.

But, whatever the reason, someone was willing to pay $13,000 for it, which is all that matters in the grand scheme of things.

And, with this sale, the Magirus-Deutz crane became the most expensive Matchbox car ever.

We hope you enjoyed our list of the 10 most expensive Matchbox cars.

Who would have thought that these tiny pieces of metal and plastic could be worth so much money.

But, Matchbox was popular in its heyday, so it makes sense that it has amassed some die-hard fans who are willing to pay through the roof for the rarest models.

Here is a quick recap of the 10 most expensive Matchbox cars:

What’s your favorite Matchbox car? Leave a comment below.